Spanish people are known all over the world for their love of partying and enjoying themselves to the fullest and they certainly know how to put on a good display when it comes to festivals in Spain.

5th January sees the end of the Christmas celebrations – Festividad de Los Reyes Magos (The Festival of the 3 Kings arrival in Bethlehem ) Celebrated in most towns and cities across the whole of Spain. In Santiago de la Ribera the 3 kings arrive by boat from across the Mar Menor then go on by float though the town throwing out presents to the children.

This also happens in Los Alcazares and many of the other towns along the coast.

La Fiesta de las Cuadrillas is on the last weekend of January in Barranda. This very Spanish of celebrations is set in the city centre and shows off the culture of the Murcia region, with a special highlight on the local folklore music. Groups with violins and other string instruments perform and even do play-off’s against each other in the street with the aim of keeping this musical tradition very much alive. 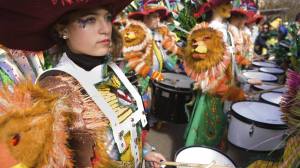 January is also when the two month long city-wide exhibition of modern art begins with viewing spaces set up in cathedrals, churches and outdoor squares as well as regular art galleries. Expect lots of outlandish, conceptual art and outrageous displays, although guided tours are offered to help make sense of it all.

With the start of February comes the carnival season with parades, costume contests and dance performances held throughout the areas of Mar Menor, Cartagena and Cabezo de Torres, festivities that are steeped in over 200 years of tradition. The town of Aguilas is said to have the wildest carnival in the country which is on the week before Lent, which falls towards the end of the month.

Slightly up from Murcia, but possibly worth the trek if you have your own car, is Las Fallas de San José in Valencia. Held between 12-19 March it is one of the biggest and most important festivals in Spain and costs an approximate €1.2 million to stage. As well as bullfights, music performances and firework displays. The finale on the last night, Nit de Foc, bares witness to a carnival of grotesque and outlandish papier-mâché and wood effigies which are set on fire.

Easter – Semana Santa (Holy Week) March or April changes every year
Semana Santa is the week before Easter Sunday and is celebrated throughout the whole of Spain and is a very important religious fiesta lasting all week with celebrations and processions happening every day.

The biggest Semana Santa celebrations in the region are in the Capital Murcia. Smaller, but no less colourful festivities and still in a grand style take place in Cartagena and San Pedro del Pinatar and most other towns. Lorca also has a very large celebration which is well worth seeing including horse drawn Roman chariots racing through the town.
The Tamborada Festival in the Murcian towns of Moratalla and Mula celebrates the Passion of the Christ with the pounding of a thousand drums over three crazy days.

There is also the three-day festival of Las Incursiones Berberiscas in Los Alcazares which begins on the Friday of the start of Semana Santa (Holy Week). There is plenty music and fun and games to be had but despite the medieval theme, the event was only actually started in 2000.

This remembers when the Berbers attacked and invaded Los Alcazares and the invasion is re-inacted on the beach on the Saturday evening.

After Holy Week comes the Fiestas de Primavera or Spring Festivals in Murcia which celebrates nature’s produce and gives locals the opportunity to show off their regional clothes. The streets are full of locales in their embroidered skirts and zaragüelles trousers.
It starts with a blessing to the patron of the city, the Virgin of Fuensanta, and is followed by a week of flamenco dancing, eating and parades of wildly adorned floats, stilt walkers and brass bands.

The Burial of the Sardine Festival, the climax of the Spring festivities, is Murcia’s wackiest night of the year.

On the first Saturday in April, and looking like a cross between Rio’s famous carnival and ‘It’s a Knockout’ a crazy cavalcade of giants and big-heads, torch-bearers and entertainers, demons and Brazilian samba groups escort a fleet of some twenty floats, which will throw hundreds of thousands of euro’s worth of toys and gifts into the crowd in the space of just a few hours.
Over the previous days, there are marches through the streets with brass bands and on the night of the eve of the Burial, the Testament of Doña Sardina (Ms Sardine) is read from the balcony of the Town Hall. The fiesta ends in the early hours of the morning, when, a papier-mâché effigy of the Lenten sardine is burnt in the Plano de San Francisco amid public rejoicing.

In May the Three Culture International Festival takes place in Murcia, an event set-up to help overcome racism and xenophobia. It brings together cultural examples of art, literature and more from three of the major religions – Christianity, Judaism and Islam. The mix is quite extraordinary and ranges from Arabic dancing to Jewish song evenings and book readings to cooking demonstrations and jazz evenings.

The beginning of this month also sees the Festival of the Holy Cross in Caravaca de la Cruz. On the second day of this 5 day fiesta, the race of the “Wine Horses” (caballos de vino) takes place where horses adorned with brightly embroidered coats are raced through the streets, although they have no riders. Instead two people lead the horse, one either side, as fast as they can up to the finishing point, the Castle de Santa Cruz, cheered on by the crowds. Dating back to 1250, this tradition is based on actual practice when the Templar Knights used to sneak across Moor territory to bring wine to the guarders of the True Cross (Vera Cruz).

If you love jazz then the San Javier International Jazz Festival is a must. The programme runs from the end of June and through the whole of July with performances on most nights with artists from around the world.

July is the time when the region’s flamenco season really gets under way as some of Spain’s top artists converge on San Pedro del Pinatar for the Festival del Cante Flamenco de Lo Ferro. Held on the first Saturday in July it really gives spectators a chance to see this most traditional of Spanish dances performed at its’ best.

During August (from the 2nd to the 11th) the Festival del Cante de las Minas gets under way in La Unión and comprises a competition where aspiring flamenco dancers and singers battle it out in the Public Market to win the coveted trophy. This has been declared a festival of International Tourist Interest.
A month-long International Festival of Theatre, Music and Dance takes place in San Javier.
There is a folklore festival in Cartagena
There is a week long Festival of La Huerta (The Market Garden) in Los Alcazares.

As in Spring, Murcia absolutely bursts at the seams with fiesta spirit in September as the city’s patron saint, La Virgen de la Fuensanta, is paid homage to once again during the Autumnal Feria de Murcia.

Everything from pageants to parades to bullfighting and pop concerts go on in locations all over Murcia city, while the ubiquitous funfair and stalls of confectionery, food and drink set up residence for the duration.

September is when Cartagena holds one of the biggest festivals of the region, The Carthaginians and Romans Fiesta which goes on for 4 days. Around the outskirts of the city Roman campsites are erected and hundreds of people dressed as either Roman soldiers, Cartaginians or barbarians and they march through the streets, staging events.
For something a little less intense there is always the Romería de la Santísima Virgen de la Esperanza in Calasparra where you can see “caballeros” (men on horses) in their traditional garb and sample plenty of rice-based traditional dishes served. As always there is plenty of singing and dancing to watch and drinking to be done.

From 8th to 13th October, Los Alcazares has a week long celebration of the town’s municipal autonomy, during which there are fireworks displays, processions, the ‘Caldero’ Festival where the local fisherman light fires on the beach and cook their catch in hanging cauldrons for the consumption of the public.

The Fiestas de Moros y Cristianos takes place in Santomera between 1st and 15th October. This popular festival sees both Christian and Moorish armies put on parades and host a number of open-air parties with performances from flamenco to belly-dancing.
In November the San Clemente festivities are held in Lorca, an event named after the town’s patron saint which celebrates its’ history and its’ many different influences through parades and music.

On the 3rd December there is the Fiesta de San Francisco de San Javier (Saint Francis of San Javier) during which there are sports, games, exhibitions and concerts.
Finally in December on the 8th, 9th and 10th there are fiestas in Totana in honour of Saint Eulalia. This is a moving, religious festival which begins with the pilgrimage of Santa Eulalia; an effigy of the saint which is brought down from a retreat in the mountains accompanied by people singing religious chants. The night before, people from the region converge at the foot of the mountain to enjoy a night of wine and ‘migas’ (a local dish consisting of fried breadcrumbs).

And of course Christmas when most towns have a Belen which is a large scene of the nativity, often occupying the whole of the main square of the town or in the City of Murcia you will find the Belen in the courtyard of the Bishop’s Palace close to the cathedral Above information is taken from http://www.discovercostacalida.info

If you have a question or would like to discuss how to make a reservation on any of the accommodation please feel free to contact us using the details below.

1 Bedroom holiday apartment for couples where you can enjoy the sun rising over the sea, hear the gentle lapping of the waves in the evening or enjoy a glass of Sangria , sleeps 2/4 . from 150 GBP per week

We understand how important it is for you to be able to take your holiday when you want; we aim to be as flexible as possible with regard to duration of stay, arrival / departure dates.

We are happy to accommodate arrival and departure on any day of the week,

Flights are often less expensive during weekdays and allows you better choice with flights,

The nearest airports are Murcia, San Javier. There are many low cost airlines that go to Murcia including Ryanair, Easyjet, Jet2 which travel from most UK and many European cities.

Alicante airport is an extra hour up the coastline and offers many more flight options. If travelling from Alicante you need to hire a car, but it can offer more morning flights if on a short trip can make it very worthwhile. Low cost airlines are great if you stay within their rules; read their small print.

We can provide a airport private transfer service to and from the apartments , please ask at the time of booking

Murcia boasts more than 30 sandy beaches between the unique La Manga strip and the impressive Mar Menor – Europe’s largest saltwater lagoon – and enjoys more than 300 days, and 3,000 hours, of sunshine every year